Bears should beware of a supportive cluster below 1.1700.

Last Tuesday’s EUR/USD signals were not triggered, as there was no bullish price action when the support level identified at 1.1745 was first reached.

Trades must be taken between 8am and 5pm London time today.

The best method to identify a classic “price action reversal” is for an hourly candle to close, such as a pin bar, a doji, an outside or even just an engulfing candle with a higher close. You can exploit these levels or zones by watching the price action that occurs at the given levels.

I wrote last Tuesday that the technical picture had become very bearish, as the price was not only breaking down to new multi-month lows, but the lower trend line of the descending price channel had been adjusted lower to remain symmetrical.

I expected lower prices over the day and thought that we might even see the price get as low at the second lower support level identified at 1.1700.

This was a good and accurate call as the price did fall over the day and reached to within just a few pips of the round number I mentioned at 1.1700.

The symmetrical bearish price channel is holding and although we have had a couple of pops up in the price after the support level at 1.1700 continued to hold, we have yet to see a serious challenge to the bearish momentum.

However, bears might need to be cautious over the short term and expect a further bullish retracement, as we have this cluster of support levels between 1.1700 and 1.1685 plus the round number confluent at 1.1700, which may take some time to break down or even produce a bullish reversal.

Therefore, I see the best approach as to wait for a bullish retracement to the clear resistance level at 1.1760 which really stands out in the price chart below and be ready to enter short if there is a bearish reversal there. 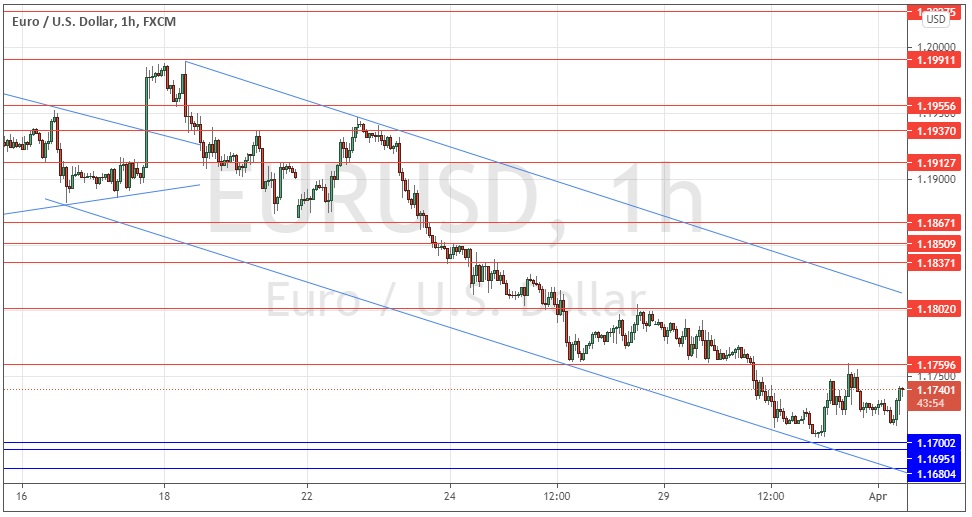 There is nothing of high importance due today regarding the EUR. Concerning the USD, there will be a release of ISM Manufacturing PMI data at 3pm London time.

RBNZ to Stick to its Guns, Eyes on Guidance – Action Forex

Trucking Stocks Race Up The Rankings